Updates from the London Chamber of Commerce and Industry 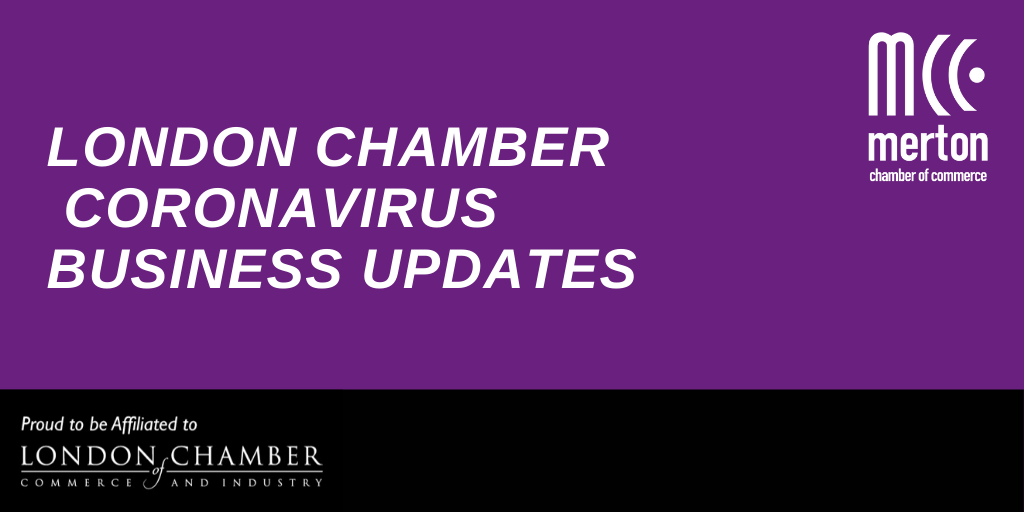 • Campaigning by the BCC and Business West has seen the scheme extended to self-employed workers. They published this letter.
• There is still little detail on when further information will be made available on discretionary funding (allocations for boroughs).

• The scheme allows small and medium sized employers, with fewer than 250 members of staff, to apply to recover the costs of paying coronavirus-related Statutory Sick Pay for two weeks - worth nearly £200 per employee.
• To get the rebate, employers will need to go online and input simple information on the employees being claimed for.
• The scheme covers all types of employment contracts, including:

£150 million from dormant bank accounts to be unlocked for charities, social enterprises, and vulnerable people

• This includes accelerating the release of £71 million of new funds from dormant accounts alongside £79 million already unlocked that will be repurposed to help charities’ coronavirus response and recovery.
• The funding will support urgent work to tackle youth unemployment, expand access to emergency loans for civil society organisations and help improve the availability of fair, affordable credit to people in vulnerable circumstances.

‍£40m boost for cutting-edge start-ups
• £40 million of government funding to support the UK’s next generation of innovative businesses
• projects to benefit from the funding include virtual reality training platforms for surgeons, virtual farmers’ markets and other innovations borne out of the coronavirus pandemic
• funding comes from a £211 million government investment package to encourage businesses developing new technologies

Apprenticeships hit hard by lockdown
‍• A study by the Sutton Trust has found that almost two thirds of companies with apprenticeship schemes have had to axe their programmes.
• The study also warned that the 7% decline in new apprenticeships at the beginning of the academic year would be exacerbated by the difficulties lockdown has caused for workplace teaching.

Guidance for manufacturers
• Make UK, the manufacturers’ organisation has launched a new course to help employers return to work safely and, going forward, manage their workforce and workplace in a safe and effective manner to deal with the threat of the virus.

New measures, at the UK border to guard against a second wave of Coronavirus infections were announced by the Home Secretary on Friday 22 May. These measures are due to come into effect on 8 June 2020. They include 14 days self-isolation for anyone entering the UK, bar a list of exemptions including:
• road haulage and freight workers, to ensure the supply of goods is not impacted;
• medical professionals who are travelling to help with the fight against Coronavirus;
• anyone moving from within the Common Travel Area, covering Ireland, the Channel Islands and the Isle of Man;
• seasonal agricultural workers who will self-isolate on the property where they are working.

New tariff regime for importing goods
• The Government announced the ‘Most Favoured Nation’ tariff regime - the UK Global Tariff (UKGT), which will replace the EU’s Common External Tariff on 1 January 2021 at the end of the transition period
• It is said that red tape processes have been scrapped to make UK trade easier, as well as noting that it is a simpler tariff regime than the EU’s Common External Tariff, thanks to the input of individuals, NGO’s, organisations and companies

New Immigration Bill passes second reading – key takeaways
• Scope of the Government’s powers: There was backlash from the Opposition and other parties about the lack of parliamentary scrutiny for the new immigration system. Labour and the SNP both criticised the wide-ranging powers that the Bill would give the Government, including its plans to implement a new immigration system via secondary legislation (Part 1, Clause 4 of the Bill).
• Visa costs: MPs raised concerns that the UK’s citizenship application fees were some of the highest in the world and called on the Government to lower their fees to be more in line with those of Canada and Australia.
• Minimum salary threshold: Opposition MPs criticised the use of a financial threshold as a measure of skills or contribution, particularly in light of the coronavirus pandemic where many frontline workers are deemed ‘low-skilled’ according to the Bill. The debate around the immigration status of key workers is likely to continue throughout the Bill’s passage.
• Shortage occupation list: A cross-party selection of MPs urged the Government to ensure that the shortage occupation list was suitably flexible. They also highlighted the need to renew efforts to train and invest in the domestic workforce.
• NHS visas: MPs from all parties, including Conservative MPs, questioned the Government on what was being done to support care workers in light of the NHS workers visa extension.

‍Second Reading of Trade bill passes
• Many have criticised the Bill for a multitude of omissions, namely the lack of environmental, human rights, scrutiny and transparency provisions.
• MPs from devolved regions have decried the Bill for potentially creating trade deals without consideration for devolved powers.
• The lowering of standards for products traded with the UK was of concern.
• Several MPs noted that greater scrutiny was promised to the House of Commons, which has not come to fruition in this Bill.

The Bill will:
• introduce temporary easements on filing requirements and Annual General Meetings (AGMs)
• introduce new corporate restructuring tools to the insolvency regime to give companies the time they need to maximise their chance of survival
• temporarily suspend parts of insolvency law to support directors during this difficult time