Mitcham forms a large and important part of the Borough with a variety of business and industrial estates scattered across it.

Located in the east of the borough, records of the area go back as far as the Doomsday Book. During Elizabethan times, Mitcham became gentrified, due to the abundance of lavender fields.

Mitcham has several diverse claims to fame.  In 1803 the Surrey Iron Railway was built along the banks of the Wandle.  It was the world’s first public railway, and whilst the iron railway went out of business in the 1840’s the route is now used by the Croydon Tramlink.

At the heart of the town centre is the recently refurbished clock tower on the Fair Green, which was originally opened in 1898 to mark Queen Victoria’s diamond jubilee.

Mitcham forms a large and important part of the Borough with a variety of business and industrial estates scattered across it. This variety offers business and office space amongst some of London’s greenest areas, but with a strong business community ethic.

Member Businesses in the Area

This Mitcham-based centre is a dynamic business environment with over 20 business tenants, employing some 150 people offering a micro environment for B2B services and networking opportunities.

In addition to their bright and airy offices to let, they offer virtual office services to suit your individual needs should you not be quite ready for an office. 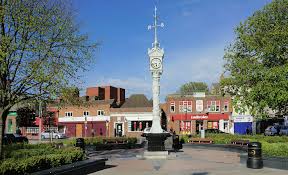